The Northern Virginia Board of Missions of the United Methodist Church began preparation for a new church in Lake Ridge in 1986 and in September of the NVBM entered into a contract for the current church site. The church parsonage at 3212 Manitoba Drive was purchased in May 1987. In June 1987, Milton Marks was appointed Pastor and the first church meeting was held at the parsonage in July 1987 with seven families attending. The first worship service was held at Springwoods 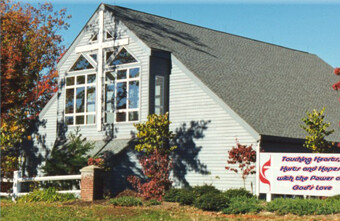 Elementary School on August 30, with 106 folks sitting in child-size chairs for the service. With 53 charter members and 45 preparatory members, Old Bridge United Methodist Church was constituted at a Charge Conference on December 20, by the District Superintendent of the Alexandria District of the Virginia Conference. The congregation moved to the cafeteria of the Lake Ridge Middle School with "adult" chairs on October 22, 1989. The first Easter Sunrise Service was held on the church property on Easter Sunday, 1990.

In June 1991 James A. Hewitt, III was appointed Pastor. groundbreaking for the new building was held on May 16, and construction began in December. On Sunday, January 13, the wooden cross (built for the Easter Sunrise Service in 1991) was carried from Lake Ridge Middle School to the church at 3966 Old Bridge Road and the first worship service in the new building was held on January 25, 1995. Bishop Stockton consecrated the building on February 26, 1995. Adequate space for Sunday School classes soon became a problem and in 1997 trailers were added as a temporary solution. Also, in the summer of 1997 a part-time Associate Pastor, Kimberly Barker-Brugman was hired. With a membership of 535 by the end of 1996, the congregation began exploring plans for adding permanent structures to accommodate their growing needs. Paula P. Werner was appointed as our Associate Pastor in June 1999.

Burton Robinson became the pastor of Old Bridge Church in June of 2004. Since he has been the senior pastor, the Missions and Discipleship building has been added to the physical plant, which includes a fellowship hall, rooms for Christian Education, a room for Youth Ministry, as well as offices for Children’s Ministry and Preschool staff. A Preschool Ministry was added to the Church in 2006 as was the AWANA program for children.

During Pastor Robinson’s tenure, Associate Pastors have been brought on board, with Ron Lanman and Charlie Stribula currently serving in those roles. Executive Directors have been hired, and additional Music Directors and Youth Directors have been employed as well. Two Contemporary Worship services have been implemented to complement the Traditional Worship service already in place. Financial Peace University, plus the Alpha Course have enabled our congregation to grow, learn, and be strengthened. Our newest ministry is the new senior community down the street from the church, Tribute at the Glen. The church is offering a sing-along every Tuesday for those folks living in the memory wing and then weekly worship services on Sunday for anyone who wants to come including Tribute staff and family members of residents.

Guided by that focus we seek to embrace and apply the word of God in our daily lives by:

Learn More here and discover how you and your family can grow in Godly relationships and through community.

Home | About Us | History